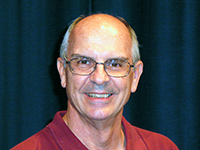 After an extensive professional career in radio (WTMR-AM) and television as producer/director at (WYOU-TV, WGGT-TV, WCTI-TV).  Ken Terres moved into the academic world as the Television Studio Production Manager at North Carolina A & T State University (1991-97). He joined the Media Studies faculty in March of 1997 as the Engineer and Facilities Manager for the Department of Media Studies. Recent accomplishments include the continual upgrade and re-engineering of the Carmichael Building and main TV studio to support the department’s production classes.