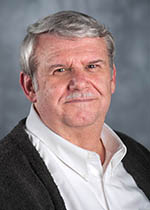 Frank Donaldson is a former broadcast journalist who teaches a variety of courses in the Media Studies program including media history, media literacy, radio and television announcing, media programming, media organization and management, and situation comedy both writing and studies courses.  Frank serves as the Director of Undergraduate Studies and the Director of the Internship program for the department. Frank typically travels to Los Angeles once a year where contacts in the television industry and alumni arrange for him to observe the production of television programs.  Frank has been the guest of the executive producers for Friends, Home Improvement, Third Rock from the Sun, The Tonight Show with Jay Leno, The Soup, Spin City, Will and Grace, That 70’s Show, Big Bang Theory, and Hot in Cleveland among others.  On occasion Frank has been able to have students accompany him to visits to the set.  Frank also tries to stay in touch with graduates for the department holding alumni dinners in New York City and Los Angeles.

Copyright © 2022. UNC Greensboro. All rights reserved. | If you have a disability and are having trouble accessing information on this website or need materials in an alternate format contact smparke3@uncg.edu for assistance.